The Great Barrier Reef is one of the seven natural wonders of the world and is easily accessible at many spots along the East Coast of Australia. From the northern tip of Queenland’s Cape York down 2,300 kilometers to near Bundaberg in the south, it varies in width from 60 to 200 kilometres wide. The Great Barrier Reef Marine Park is 344,440 square kilometres containing 14 coastal ecosystems, 3000 coral reefs and 600 continental islands.

For the estimated two million tourists wishing to visit the Great Barrier Reef the three most popular departure points are Airlie Beach, Cairns and Port Douglas. It is such an amazing place to visit, everyone who visits the reef is touched in more ways than one. So many visitors are not satisfied with just one visit so they return year after year!

The Great Barrier Reef is the largest coral reef in the world, visible from space and is one of the most complex natural ecosystems in the world.

Corals are marine invertebrates, a group of animals that also includes jelly fish and sea anemones. They come in a variety of colours, shapes and sizes, and have a simple stomach with a single mouth opening surrounded by stinging tentacles. Each individual coral animal is called a polyp. A colony is the result of hundreds of thousands of identical polyps (they basically grow copies of themselves) living together.

Coral is either hard coral  or soft coral. There are about 800 hundred species of hard coral (Scientific name Scleractinia), also known as “reef building” coral. Soft corals, (Scientific name –  Alcyonacea or Octocorlilla),  resemble coloured plants, have eight tentacles and usually thrive further from the surface than the hard corals. 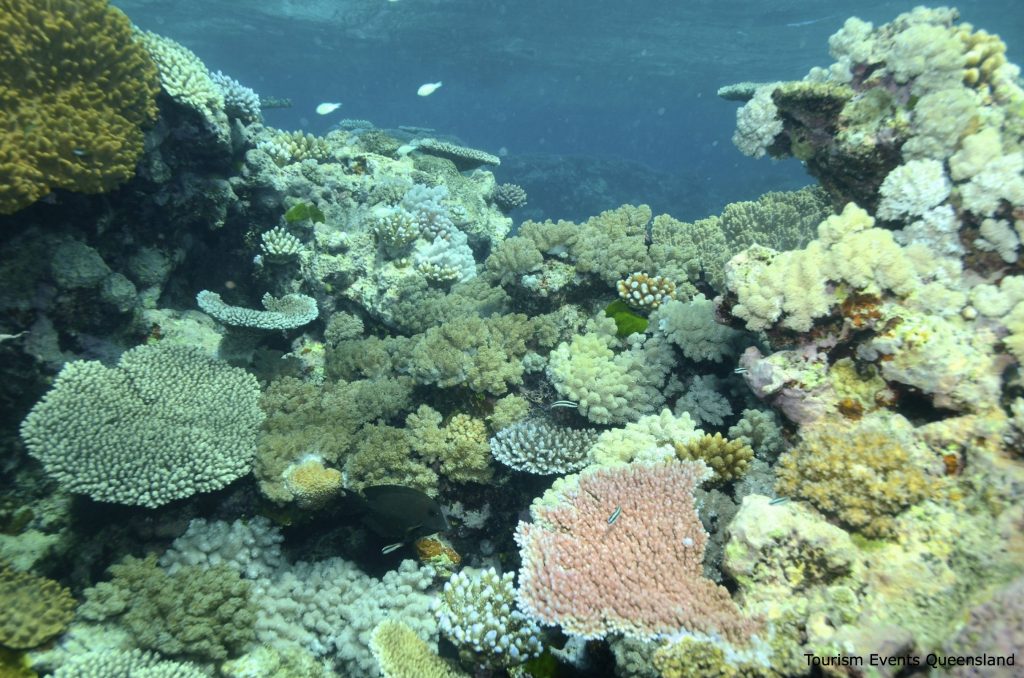 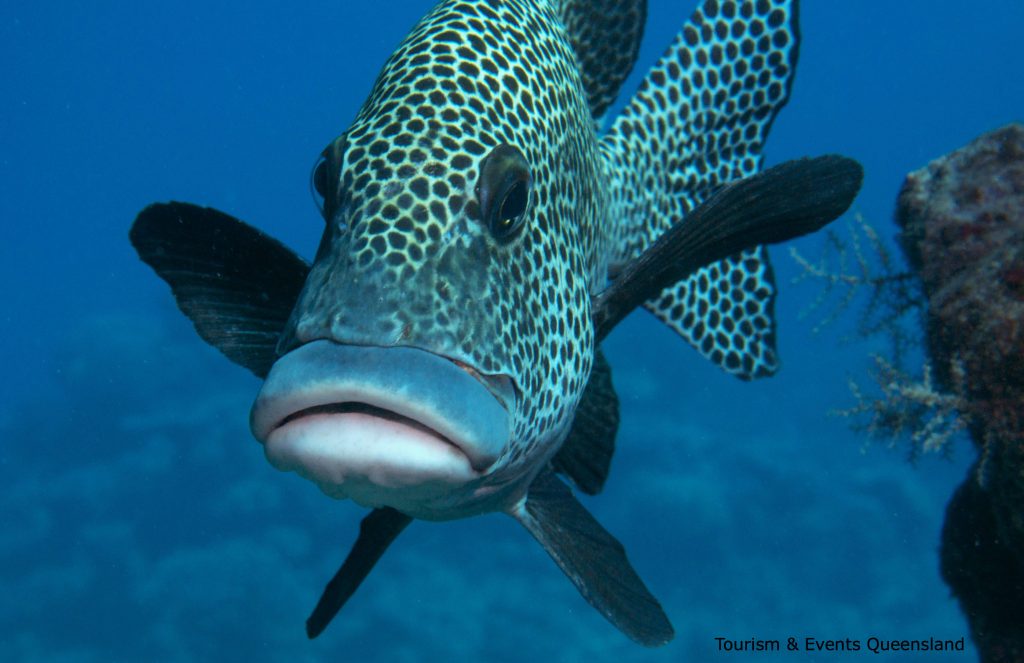 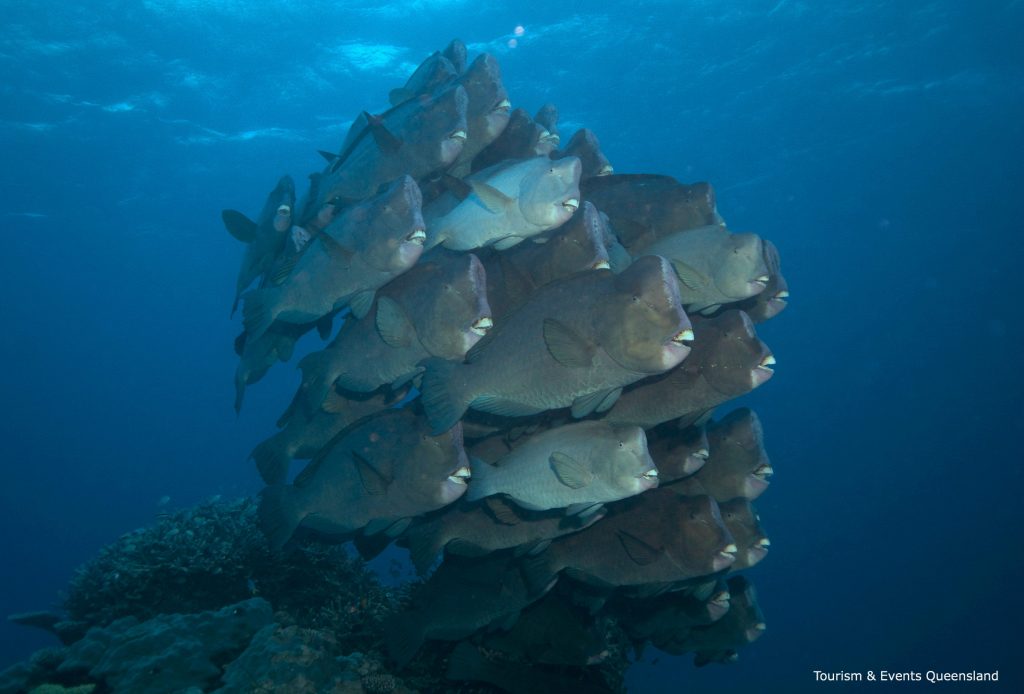 Wonderful creatures of the sea 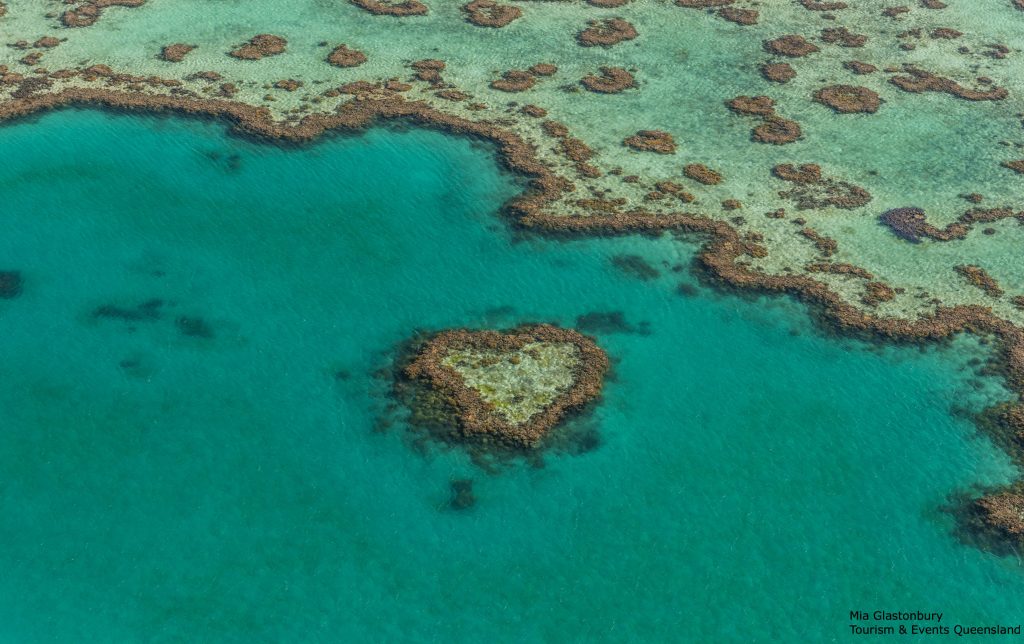 The number one attraction at Airlie Beach is Whitehaven Beach a 7 kilometer stretch of white silica sand on Hill Inlet, part of Whitsunday Island. It is one of the most pristine beaches in the world and the white silica sand is so fine to can be used to polish jewellery.

The other attraction can only be viewed from the air, Heart Reef, pictured here. It wasn’t discovered till 1975 and is now protected to exclude diving and snorkelling. Most flightsover the area include views of Heart Reef and Whitehaven Beach.

The reef is actually 90 nautical miles from Airlie and is a 2.5 hours trip each way. The time passes quickly as you are mesmerized by the beautiful scenery you pass through. The reef you visit is called Hardy Reef. For a once in a lifetime experience try an Overnight Reef Sleep, spending the night at the Hardy Reef pontoon.

There are over 70 islands in the area ranging from uninhabited through to Hamilton Island with resorts and its own airport. With so many islands it is no wonder that there is a wide selection of sailing and boating tours in the area.

The proximity of the Great Barrier Reef to Cairns offers such a wide range of choices. You can take a day trip to the outer reef or spend a day or more on one of the tropical islands near Cairns where the reef is just a short swim off the shore. There is such a wide range of options and operators you will find something in Cairns to suit your tastes. You can even take a remarkable tour where a helicopter will drop you off for a private picnic on a secluded sand cay.

If you are staying at Port Douglas you have chosen a beautiful part of the world to holiday. There are numerous tours to the reef starting from here, choose whether you want to snorkel or dive in the wonderful coral gardens. From Port Douglas you can travel to see the reef at Low Isles, Opal Reef or Agincourt Reef or a combination of these.

If you are looking for more information on some of these or other Australian destinations the check out our Travel Guides.

Go to the travel guides page

When is the best time to visit the Great Barrier Reef.

The Great Barrier Reef is 2,300 kilometres long so the climate and weather conditions will vary greatly between the northern and south areas of the reef. The Great Barrier Reef is one of those places where anytime is the right time to visit. Most of the reef is in Tropical waters so even in winter the water temperature is still comfortable. At different times of the year, different events are occurring on the reef, be it whale migration in winter or coral spawning late in the year.

Also, don’t be put off by the wet season, quite often it may be raining on the coast yet out on the reef the sun is shining.

As the Great Barrier Reef is in the southern hemisphere it gets warmer the further north you travel!

This is the start of the dry season and weather can be brilliant, warm days and cooler nights. There will be less visitors to the reef and even some operators offering special. At this time of the year many juvenile fish and sharks are visible for the first time.

Temperature is cooler (evenings are cool) and this is the tourist high season. The winds reduce and sea conditions become calmer. At different points on the reef you can watch the whale migration. The most popular time to visit the reef.

October, November and December is when the coral spawning takes place. The event happens at the inshore reefs normally within a week of the first full moon in October whereas for the outer reefs it can occur as late as December. The event happens at night and is one of the most spectacular events to see occur.

The water temperature starts to rise as the wet season begins. Tourist numbers do drop off and in some areas marine stingers (Jellyfish) can be present so be sure to follow the warnings. This is also the time the Manta Rays become more active in some areas, and early in the year the turtles begin nesting and hatching.

Ways You Can Pay